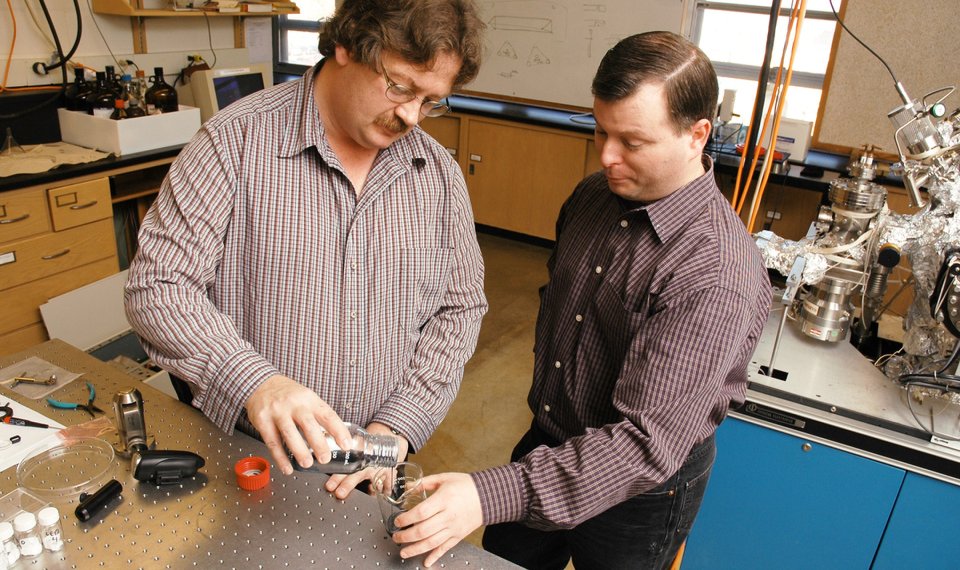 STILLWATER — A new weapon to improve national security and safety in laboratories working with explosive chemicals has been created by a fledgling business formed at Oklahoma State University.

OSU business graduate Shoaib Shaikh and associate chemistry professors and research scientists Allen Apblett and Nick Materer are the creative minds at XploSafe LLC, which makes a nanotechnology-based ink that changes color after detecting peroxide, chlorate and nitro based explosives.

Founded last June, XploSafe was born after scholarship winner Shaikh’s and two other students’ entrepreneurial ambitions were matched by OSU’s Spears School of Business with Apblett and Materer’s multi-year research into development of a compound to detect explosives.

The pair’s research was funded by a grant from Oklahoma City-based Military Institute for the Prevention of Terrorism, Materer said.

The match-up between scientists looking to market a new product and a team of entrepreneurs looking to enter a national business-plan competition was perfect timing by OSU professor Michael Morris, head of the business school’s entrepreneurship department.

XploSafe’s ink technology is water-based, and its dark blue ink turns a pale yellow or becomes colorless when it comes in contact with explosives that contain peroxides, hydrogen peroxide plastic or chlorates.

The inks are in several product forms, or sensors, including test strips, sterile capillary tests and an explosive detection kit.

The sensors neutralize those explosive compounds, making them a valuable detection and prevention tool for the national security and law enforcement markets, as well as the laboratory safety market, Shaikh said.

The product is being tested by law enforcement agencies, including the Oklahoma Highway Patrol and the bomb squad of the Tulsa Police Department, he said. Reports so far have been positive, “and we’ll be connecting with them soon,” Shaikh said, with a goal of sending samples for testing to other states.

The products could prove to be helpful to airport security when liquids would need to be checked for any explosive capabilities, said Shaikh.

A second product now ready for testing is a sensor pellet that can be added to ethers and other solvents to detect built-up peroxide, Shaikh said.

That pellet is designed to help derail potential problems in chemicals that labs use on a daily basis, Materer said.

“Solvents that age become explosive, and can cause injuries and even deaths,” he said. “The idea is to prevent that.”

Despite its young age, XploSafe is the first company to be accepted into the Department of Homeland Security’s FutureTech program, which allows private technology companies to work with the department to develop and provide solutions for homeland security, Shaikh said.

If XploSafe moves through nine levels of the program, it can be available for use by the military and airports, he said. But working with the government takes time, and just like any start-up, Shaikh said they are trying to raise capital and approach private investors.

“We’re an early-stage company,” Materer said. “We’re not in the airports yet.”